In the eternal quest to answer the question: how do I get on page one on Google, a new update to the search engine has people worried (or optimistic) about their SERP scores thanks to Featured Snippets.

In a recent announcement, Google has stated they are making changes to first page results. You may have noticed in the past, some search results would show you a top suggestion that is separate from the text links beneath. This top section is called Featured Snippets.

What are Featured Snippets?

Featured Snippets is a section that displays a high-ranking result, and is aimed at giving the user a quick answer to their search question. The interesting thing, though, is sites that appeared in the Featured Snippets section would also be listed in the organic results on page one – the standard text and links you see. 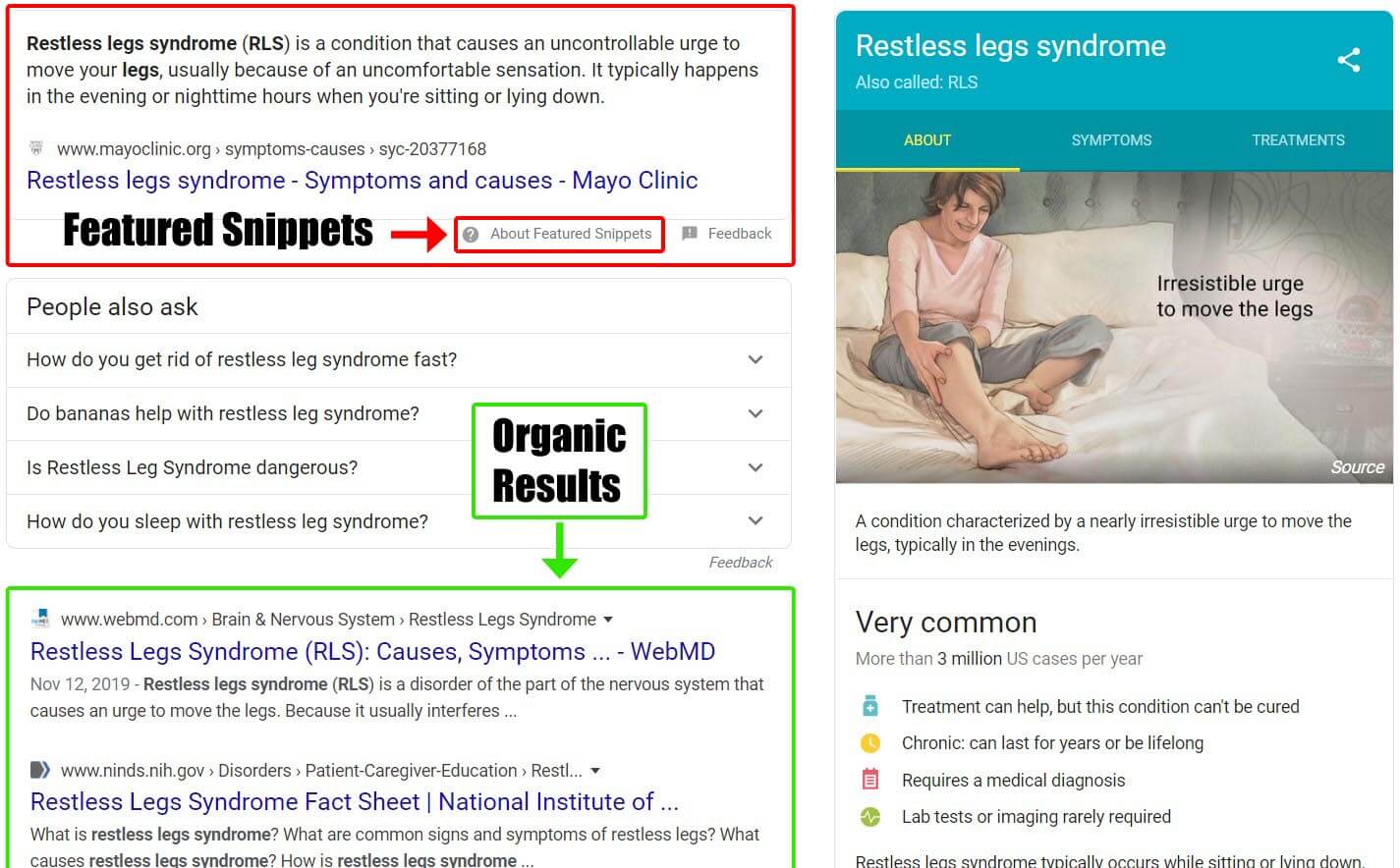 Organically, it made sense. If a site has a great web design structure with well-organized content and is relevant enough to be featured as a top result, then surely they would rank well enough to appear in the organic results on the first page. This logic is true. But if you think about it, it gave a site two front-page links – one organic, and one chosen by Google. Plus, with Google’s first page so highly sought after, combined with the limitation of a maximum of 10 organic links on the front page, one lucky site was taking up valuable real estate!

That prompted Google to change how they do first-page results. To prevent one site from being given the feature spot and taking up a result in the organic section, Google decided that if a site is given the featured snippet, then it will not appear again on the front page. This allows all other sites on the front page (in and below the slot the featured site would have occupied) to move up! That means a site that missed the cut and landed at the top of page two would be moved up to the bottom of page one!

One thing to consider is whether or not featured snippets drive traffic to your website? It’s a good question. Because if you think about it, when users search for an answer and a featured snippet gives them a satisfying answer, there is a good chance that the user will not click on the link to the site because they got what they wanted. So, although your site may be shown as the featured snippet, it doesn’t guarantee that people will click to go to your site. A conundrum.

So again: do featured snippets drive more traffic to your site or not? Databox took a survey with the same curiosity asking if site owners saw traffic coming in from snippets or not, and the results favor the affirmative: 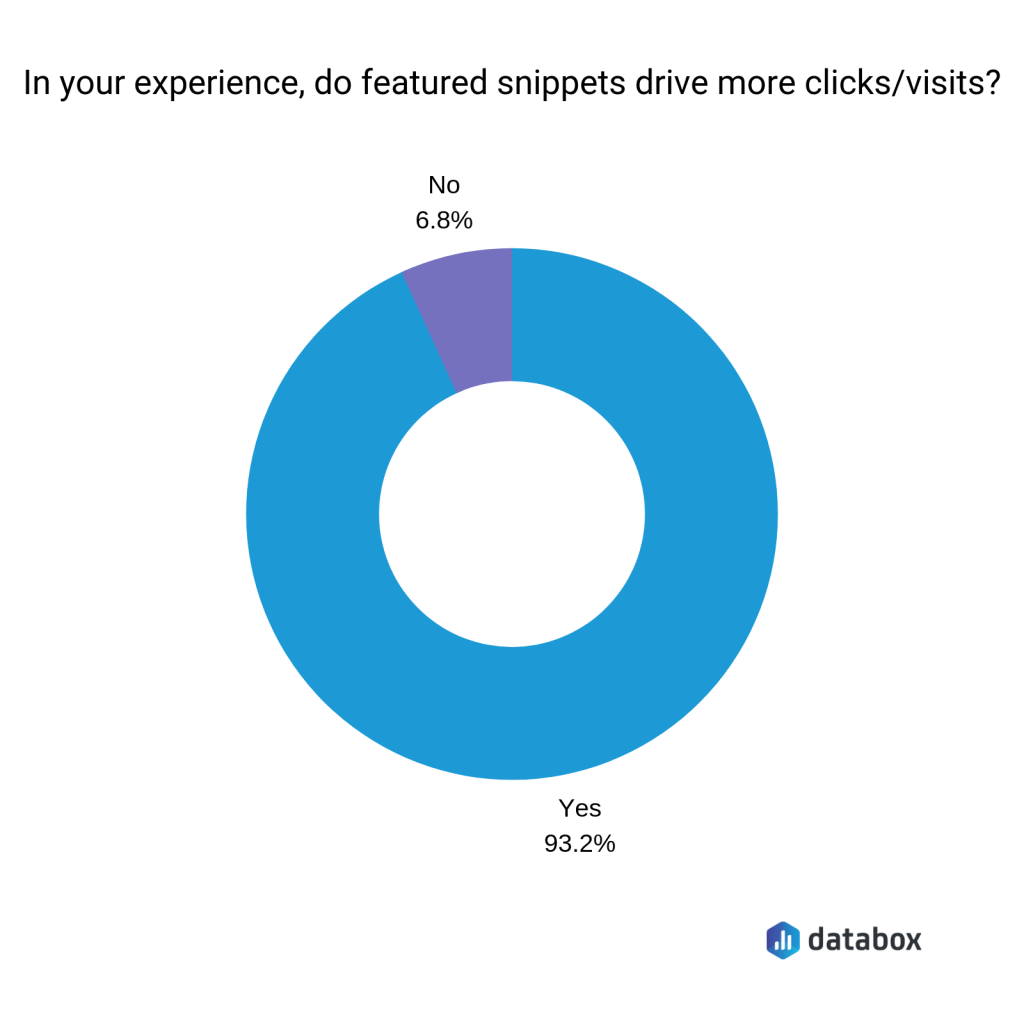 Out of everyone that took the poll, 93.2% of them say that they do see more clicks or visits after being featured in snippets. That’s good to know.

How does this affect websites?

The effect this will have on websites’ SERPs still remains to be seen. No one actually knows all the inner workings of the Google algorithm, so the only thing we can do now is to wait and see how things shakeup. Me, personally, I have seen my site move up in the rankings. But, is that due to Google’s new change or due to great web design? I don’t really know, but I believe the latter since my site had been rising since before the announcement. Some websites may choose to block the Featured Snippets option on their sites, preferring to choose the organic route; And others may try harder with their SEO to get considered for the Featured Snippets since it is the first result seen.

Regardless, solid SEO practices will always put you in a great position. As of this writing, I still have a 100% success rate for getting my clients to page one on Google [check out my SEO case studies]. In those cases, moving up (if not already #1 overall) only helps! And regardless of subtle changes implemented by Google, strong SEO is the core of high-ranking sites.

So yeah, this seems interesting and I will keep an eye on what changes. But in the end, I don’t think it will make much of an impact – negatively anyway. A featured result will be the first thing seen, even if they don’t get the standard result, too. And a site that was on the cusp of the first page will be moved up and have a greater chance for traffic after reaching page one! We will see.

If you would like your site to do better in the search rankings, contact me for an SEO audit and I can get started on getting your site better search results.